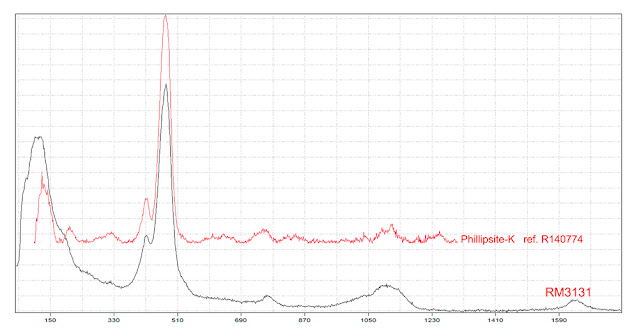 RESTORATION OF THE "ANGEL's CROSS" JEWEL of SALVADOR DALÍ

Dalí was a versatile surrealist artist: a great writer, show-man, stage designer and also a painter, his best known side. Dalí works, full of allegories to his personal experiences, fears and obsessions, are exposed in the best museums worldwide. A perhaps lesser known facet is jewelry design. During his long stays in the United States he saw an important economic source fulfilling the wishes of women of the richest families and, at the same time, exploring one more field of his unattainable creativity. Dalí himself said: "When I design jewelry, as in all my art, I create what I like."

From 1941 to 1958 Dalí designed a jewelry collection and followed the entire creation process associated with Ertman and Alemany, two established jewelers and goldsmiths in New York. Dalí made the sketches that later became sculptures combining all kinds of noble materials. Throughout his life he continued to create new jewels, many of which can be enjoyed at the Gala-Salvador Dalí Theater-Museum in Figueres.

In 1958, the jewelry collection was acquired by The Owen Cheatham Foundation, a prestigious American foundation created in 1934 that ceded the jewelry collection for various charity, educational and cultural associations to raise funds with the exhibition. Finally all these jewels were deposited at the Virginia Museum of Fine Arts, in Richmond. The jewelry collection was temporarily exhibited at the Gala-Salvador Dalí Theater-Museum in Figueres during the months of August and September 1973, one year before the official inauguration of the Museum. In 1981 the collection was acquired by a Saudi billionaire and, later, by three Japanese entities, the last of them was the one that formalized the sale to the Dalí Foundation, for an amount close to 900 million of Spanish "pesetas".

Dalí’s fondness for minerals, rocks and geology, especially Cap de Creus (Girona, Catalunya), is evident in several of his works. We can also see specimens of minerals, not always the decorative classics, in his house in Portlligat. I invite you to look for them on a future visit.

The jewels on display in the Figueres museum, apart from the fascinating cutted gems (diamond, ruby, emerald, sapphire, aquamarine, topaze, etc.), are often disposed on basis of natural minerals such as quartz, opal, xylopal or beryl.

One of these wonders is the "Angel's Cross" (1960) which Dalí himself says represents "the treatise on existence: the gradual transformation from the mineral world to an angel". The sculpture, according to the artist, has been "built on the mathematics of the number 12. The same cube that immobilizes the structure of the Coral Cross is based on the number 12", as the twelve needles of the base, which they remember the movement of the spikes of a sea urchin. Twelve is symbolic in many cultures, it represents the number of perfection.

The base represents the "initial stage", the union of the mineral world represented by a base made of fragments of a quartzite rock with a layer of marcasite-pyrite and fragments of polished lapislazuli, on which we finnd the vegetal world represented by corals (sic), red as blood, and somesea urchin spikes, the animal world. This primary, irrational structure rises through the body of the cross, in the shape of a red coral, and supports a human body: Jesus Christ crucified. But this human body sublimes into a spiritual, angelic, radiating light, which can be seen perfectly when is open the huge cutted citrine gem. The whole cross structure is made up of gold cubes.

What happens to the base of the jewel?
This question is likely to be proposed by the restoration and preservation equipment of the Gala-Dalí Foundation, when in one of the routine revisions they saw that, on the base several fragments were detached. 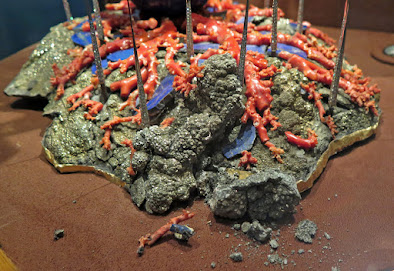 Frontal view with the "disintegration" of the marcassite.
© Fundació Gala-Salvador Dalí.

Immediately they contacted with the reference jeweler of the Foundation, Noa Florensa. This well-known Catalan jeweler was the person who decades ago, when the Foundation is going to acquired the jewels collection, she carried out the ingent and meticulous work of restoring and giving them the splendor and the original functionalities. The years also go by the jewels. The jeweler has been intervening for years when some of the pieces show any conservation problem.

Seeing that the base was a mineral, not a cutted stone, she suggested contacting Montse Bagué and Josep Maria Serrano, two well-known gem carvers and members of the Grup Mineralògic Català, we usually find them at the mineral shows with a shop with materials and tools for stone “carvers”. They both quickly saw that it was a possible marcasite-pyrite specimen, not a sphalerite, according to a report by the Asociación Española de Gemmología that was made when the collection was purchased. Josep Maria and Montse also appreciated a treatment would be necessary which escaped from the lapidary world. For this fact they contacted me.

On my first visit, I could see it was a pyrite that had been completely or partially converted to marcasite. All mineralogists and collectors know that the marcasite in our collections can be stable for many years, but one day specimens begin to "disintegrate." A powder appears, cracks open and finally the collapse, if the cardboard or plastic box is not stained or perforated.

The "disease" of this Dalinian stone was clear: a certain degree of ambient humidity, marcasite oxidation, formation of sulphuric acid and the corresponding sulphates. A dark future was expected...

A bibliographic search of known methods in the conservation of minerals was done, focusing on the “pyrite decay” (a very Dalinian title). Several methods were put on trial, but the characteristics of the piece -with corals and lapis lazuli glued with resins-, the size of the specimen and its structure did not allow us to use certain methods.

What did we do to stop the degradation?
The method of treatment chosen, considering pros and cons, was that of ammonia vapors generated by a solution of ammonium hydroxide (NH4OH) in polyethylene glycol-400 (PEG-400) as a humectant. This process is described in several articles, but we used R. Waller’s article detailing the whole process (Waller, 1987).

The piece and fragments were mechanically cleaned. All the efflorescences, sulphates (coquimbite, melanterite, copiapite...) were eliminated. We even observed a small cavity in the matrix, between marcasite and quartzite (which was no longer of massive sulfides as we had assumed before having it "in our hands") from which dust kept coming out. 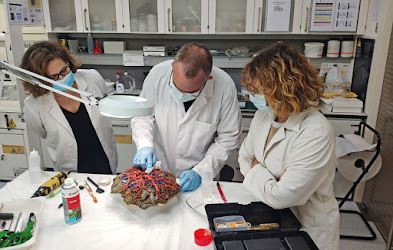 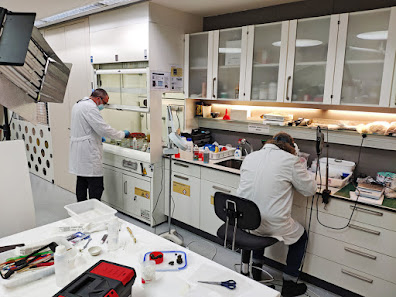 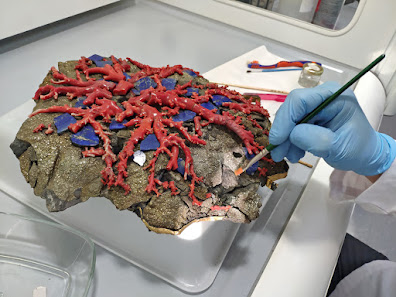 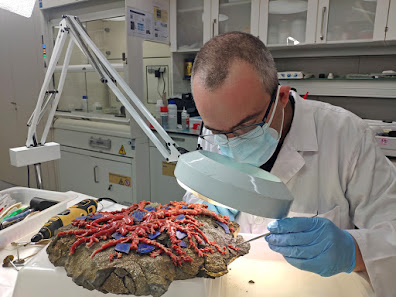 Once clean, base was deposited in large tupperware with the ammonia-PEG400 mixture. PEG-400 is a very dense liquid that has humectant properties, as we said, that is, it absorbs humidity. We think that moisture is the enemy of marcasite and much more in an aggressive environment full of ammonia vapors. In this way, inbox atmosphere is kept well below the ambient during the treatment. 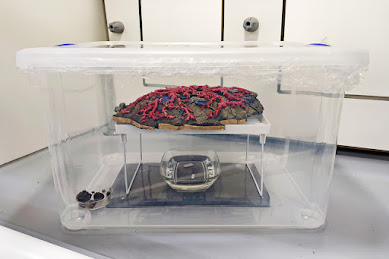 What did we see during the treatment process?
The altered surfaces turn on a reddish-brown tone, Fe(III) hydroxides were forming. Sulphates were transformed into hydroxides. Possible sulphuric acid was neutralized to form ammonium sulphate. The healthy marcasite did not lose its color and the lapis lazuli and coral remained with their original luster.

After the treatment, the reddened surfaces were mechanically cleaned. Sample was cleaned with isopropanol and acetone to remove most of the dust from the salts formed and moisture. To protect these areas from moisture they were coated with a thin layer of Paraloid B-72, an acrylic resin widely used in repairing and protection of minerals... Some cracks were consolidated with the same Paraloid (but more concentrated) or with epoxy adhesives. 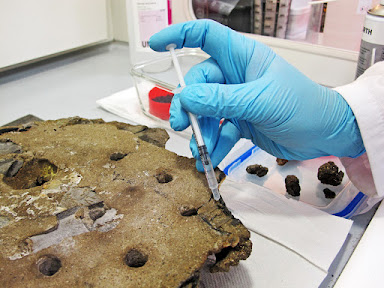 After this, Noa Florensa began to assemble the "puzzle" of detached fragments. A very complex puzzle: no two pieces were alike and some had disintegrated into dust, then missing pieces. The end result, after hours of testing, was quite acceptable and similar to the original. 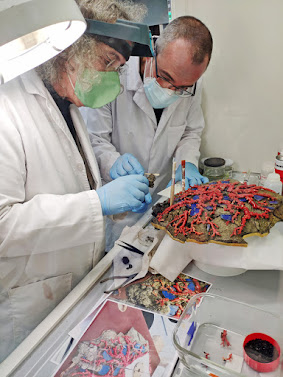 With Noa Florensa, and the puzzle on her hands.
© Fundació Gala-Salvador Dalí.

The piece now rests in its "sarcophagus-tupperware", accompanied by desiccant silica-gel, waiting for the display case to be conditioned to maintain a permanently dry atmosphere. 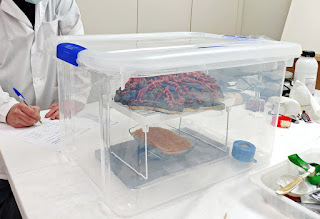 Bacteria attack?
There has been a lot of news about the "bacterial attack" on Dalí's jewel. No, marcasite has not disintegrated due to bacteria. Humidity has been responsible. Although the Museum controls it, any occasional rise in humidity may have started the process. Bacteria, if any, are opportunistic, they have been added to the "sulphuric feast" (another very Dalinian title) to eat and defecate more acid.

The reaction-disintegration of marcasite is favored by the presence of these sulphur bacteria, such as Acidithiobacillus ferrooxidans or A. thiooxidans. However, it is also recognized that the importance of bacteria in storage conditions in dry museums is negligible if not ruled out. Fenlon and Petrera (2019) even cite a 95% HR limit, below which bacteria are not viable.

For this reason, a group of IDAEA experts in these extremophiles was also contacted, through Joan Gutiérrez (from the UB and PhD student at IDAEA), who carried out genetic studies to determine if the bacteria were there, and if any, which ones.

Recently (march 2021), we have received the information that no expected bacteria was present. 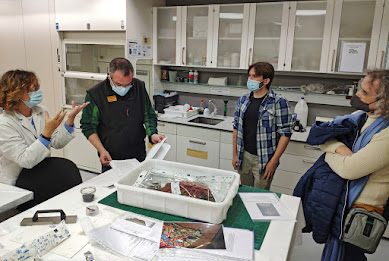 What is the future of the jewel base?
As we have said, marcasite is prone to alteration in the presence of moisture and oxygen, so if the piece is kept in a low humidity atmosphere we can predict many years of life to it.

However, I personally think that Mr. Dalí would have been very happy to replace the damaged base with a magnificent Peruvian pyrite, full of golden reflections (like gold!!!), like those you can find in mineral shops as balls, pyramids and obelisks or that has been used as a basis for the FIFA Ballon d'Or "Golden Ball", that a well-known Barça football player has won so many times. But Mr. Dalí is not here to opine. Therefore, it is necessary to follow the opinion of experts and preserve everything that is original, as long as possible.

And don't forget to visit the Museums that make up the constellation around Salvador Dalí. You will find more minerals than you think... 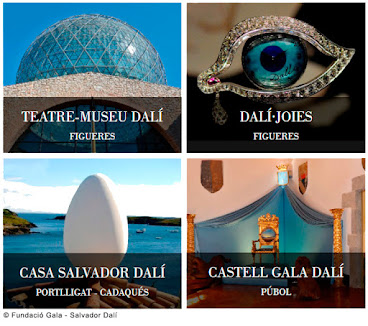 Acknowledgments
I would like to thank Montse Bagué and Josep Maria Serrano for thinking of me to do "cooking". To Noa Florensa to explain to me the point of view of fine jewelry and some techniques used. To Irene Civil, head of conservation and restoration of the Gala-Salvador Dalí Foundation, Elisenda Aragonès, conservation and restoration technician of the Foundation and Yvonne Heinert, photographer and documentalist of the Foundation, for the trust placed in me and for what they have taught me of Master Dalí. I would also like to express my gratitude to Montse Aguer, director of the Dalí Museums for her kind welcome.
Some Bibliographic notes
- Waller, R. (1987). “An experimental ammonia gas treatment method for oxidized pyritic mineral specimens”. ICOM Committee for Conservation 8th Triennial Meeting Sydney Australia 6-11 September 1987. Getty Conservation Institute.
https://www.icom-cc-publications-online.org/3203/ [March 2021].