Native copper specimens are well known from Oumjrane mines. These mining area is located about 40 km. south of Alnif, in Morocco.

They show usually arborescent forms formed by several small deformed copper crystals. Many of the specimens have on its surface cuprite and other copper secondary species. On descriptions we can see that these green layers are mainly carbonates, like malachite, and/or some sulphates, like brochantite as well.

Few month ago I acquired some interesting copper specimens from this locality. Only few of them show a very nice apple green color crusts, but partially covering deep blue-green color, brilliant defined crystals. After a conscientious inspection under loupe I could observe that these crystals were rich in facets, and translucent under intense light. 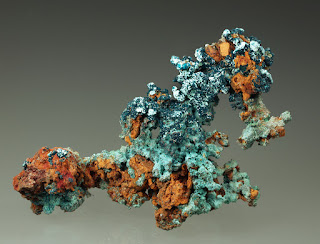 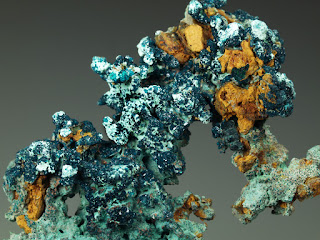 As always, we proceed to analyze them with SEM-EDS spectroscopy. Results were surprising. Only copper, oxygen and carbon were detected. Sample was recovered by carbon and it was not possible to confirm percentage. We thought in a carbonate or an organic copper compound.


Checking composition in mindat website, we observed that only few carbonates coincide, but no one with this color and crystal shape. Only one had similar color and shape, an organic compound, a hydrated copper acetate called hoganite. We proceed to identify crystals using Raman spectroscopy. Results were totally consistent with hoganite Raman parameters published by A. Musumeci and R. L. Frost (2007) PDF.

Hoganite is a very rare species, with formula Cu(CH3COO)2·H2O named in honour of Mr Graham P. Hogan of Broken Hill, New South Wales, Australia, a miner and well-known collector of Broken Hill minerals, who originally recovered the material. He also provided the locality information and observations about the association of the minerals with decomposing vegetable matter. The mineral and name were approved by the IMA Commission on New Minerals and Mineral Names in 2001 (2001-029). Hoganite was found as isolated, bluish green prisms up to 0.6 mm long in ferruginous gossan in the Perilya Potosí mine, in Broken Hill. This species is accompanied by the paceite, a hydrated calcium copper acetate, CaCu(CH3COO)4·6H2O. Both species were described by Hibbs et al. in 2002, PDF.(1)


Specimens we have studied forms tabular to equant pseudohexagonal crystals; some of them with something similar to rhombohedron faces. Hoganite is monoclinic. Transparent to translucent, with good brilliance and curved faces and edges. They are disposed on the copper and "limonite" matrix and accompanied by light green globular aggregates of a unidentified copper chloride (SEM-EDS) similar to atacamite. These chloride is partially covering hoganite crystals.


The origin of these crystals is not completely known. "Natural" hoganite specimens are formed, as we said before, from decomposing vegetable matter, like leaves or mine wooden beams. But in this case, we propose that these crystals could be formed, in dry conditions, from acids (vinegar) and solutions, those miners are using to clean native copper specimens. But the presence of the copper chloride covering hoganite is a point to investigate.

Aknowledgments
Thank you to Dr. Joan Carles Melgarejo from Universitat de Barcelona (UB) and to the SEM staff from the Centres Científics i Tecnològics UB (CCiTUB). Also to Dr. Tariq Jawhari, from Raman department of the CCiTUB for Raman spectra analysis.